Women Lead: Ukrainian Women’s Fight for the Future of Ukraine

After almost one year of Russia’s full-scale invasion of Ukraine, the global community has seen countless Ukrainian women stand up for themselves, their communities, and their country. Despite the disproportionate increase in protection threats against women and children, Ukrainian women have not been deterred. Ukrainian women leaders have risen and continue to rise to the occasion.

The United States remains deeply committed to amplifying Ukrainian women’s voices and protecting their rights. This virtual panel focuses on the leadership of Ukrainian women, the uniquely gendered impacts of the war, and the courageous work of Ukrainian women leaders from government, civil society, journalism, pop culture, and other sectors. 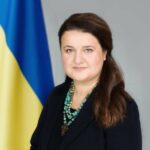 Oksana Markarova, Ambassador Extraordinary and Plenipotentiary of Ukraine to the United States

Oksana Markarova was appointed the Ukraine’s Ambassador to the USA and arrived in DC on Apr 20, 2021. She served in Ukraine’s Ministry of Finance in 2015-2020 as First deputy Minister and Government commissioner on investments and then since 2018 as a Minister of Finance. During her time at the Ministry she was a co-author of Ukraine’s macroeconomic revival program, has conducted unprecedented fiscal consolidation leading to deficit to GDP of 2% and debt to GDP reduction to below 50%, introduced midterm budgeting, gender oriented budgeting as well as negotiated, structured and coordinated successfully two IMF programs and other IFI cooperation programs. During her tenure she and her team has also created UkraineInvest government promotion agency, Ukrainian Startup fund and an eData ecosystem of government public finance portals including spending.gov.ua, openbudget.gov.ua and analytical instrument BOOST, which opened the majority of the public finance data to the public and increased Ukraine in all major international data transparency ratings. Prior to career in public service Mrs. Markarova spent 17 years working in private equity and financial advisory having leadership roles in ITT investment group, Western NIS Enterprise Fund, Chemonics and World Bank, as well as founded Archidata startup electronic archive company in between service positions in 2020.

Ambassador Brink was nominated by President Biden to be U.S. Ambassador to Ukraine on April 25, 2022, confirmed unanimously by the U.S. Senate on May 18, 2022, and arrived in Kyiv on May 29, 2022. A career member of the Senior Foreign Service, Ambassador Brink served as U.S. Ambassador to the Slovak Republic from August 15, 2019, until her confirmation as Ambassador to Ukraine. She previously served as Deputy Assistant Secretary in the Bureau of European and Eurasian Affairs at the Department of State, with responsibility for issues related to Eastern Europe, the Caucasus, and the protracted conflicts in Europe. She also served as Deputy Chief of Mission at the U.S. Embassies in Tashkent, Uzbekistan and in Tbilisi, Georgia. During her twenty-five years in the Foreign Service, Ambassador Brink has spent most of her career advancing U.S. policy in Europe and Eurasia. She was the Director for the Aegean and the South Caucasus at the National Security Council and also served in the State Department as the Deputy Director for Southern European Affairs, Special Assistant to the Under Secretary for Political Affairs, and Cyprus Desk Officer. She began her career in Belgrade, Serbia. 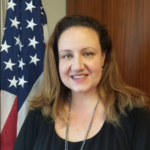 Katrina “Kat” Fotovat is currently the Senior Official to the Secretary of State in the Office of Global Women’s Issues (S/GWI), where she leads a team of gender experts promoting gender equality efforts including support of women, peace, and security, countering violent extremism, promoting women’s economic empowerment, and combatting gender-based violence. Ms. Fotovat has over 20 years of experience advocating gender and human rights globally, specifically in conflict and post-conflict settings. Previously, Ms. Fotovat was Director for the Office of Communications, Policy, and Partnerships, in the Bureau of Conflict and Stabilization Operations. 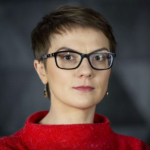 Nataliya Gumenyuk is a well-known Ukrainian journalist, and author specializing in conflict reporting. She is the founder and CEO of the Public Interest Journalism Lab which promotes constructive discussion around complex social. Since the Russian invasion, PIJL pivoted to frontline media reporting, and launched “The Reckoning Project: Ukraine Testifies” which documents war crimes and crimes against humanity committed by Russia. Nataliya regularly writes for The Guardian, The Washington Post, The Rolling Stone, Die Zeit, and The Atlantic, and provides commentaries for CNN, MSNBC, Sky News, etc. Gumenyuk was the co-founder and for 5 years head of independent Hromadske TV and Hromadske International, and is currently is a Board member.

Yevheniia Kravchuk, Member of Parliament and Deputy Head of the Servant of the People Party

Yevheniia Kravchuk is a Ukrainian politician, journalist and communication expert. Deputy Chair of the Servant of the People faction. Deputy Head of the Committee on Humanitarian and Information Policy. Head of the Subcommittee on Information Policy. Expert in communications and media consulting. In 2019-2021 Kravchuk was the Chairperson of the press office of the political party “Servant of the People” Co-author of more than 100 current laws of Ukraine. Worked in management positions in analytical centers, in journalism, and in documentaries. 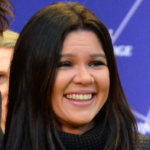 Ruslana Lyzhychko is a civil society activist, human rights advocate and a leader of Ukraine‘s Maidan movement for democratic reform. Her steadfast commitment to non-violent resistance and national unity helped channel a series of popular demonstrations into a national movement against government corruption and human rights abuses. Ms. Lyzhychko started her career as a pop music star, earning international fame for winning the 2004 Eurovision song contest. In November 2013, Ms. Lyzhychko became one of the most powerful voices and leaders of Ukraine’s EuroMaidan movement using her celebrity status and social media connections to encourage citizens to demonstrate peacefully for a change of political course. Her performance of the Ukrainian national anthem every night, even in the face of impending police attacks and death threats, fortified the movement and became a symbol of its commitment to a diverse and unified Ukraine.