Secretary of State Antony J. Blinken will hold a global town hall to discuss diplomatic and institutional priorities for this year and answer questions from the workforce.

The Secretary invites all State Department employees to join the discussion, January 25, 2023, at 8:30 a.m. EST.  The town hall will be moderated by Liz Allen, Senior Official for Public Diplomacy and Public Affairs.

The Secretary will take live questions from the audience as well as questions from remote viewers.  In person attendance of the global town hall is on a first come, first serve basis. Those who wish to attend in person should be in the Burns Auditorium no later than 8:15 a.m. EST.  There will be an opportunity to submit questions during the town hall via a live chat box.

Antony J. Blinken is the 71st U.S. Secretary of State.

He was nominated by President Biden on November 23, 2020; confirmed by the U.S. Senate on January 26, 2021; and sworn in by Vice President Kamala Harris the following day.

Over three decades and three presidential administrations, Mr. Blinken has helped shape U.S. foreign policy to ensure it protects U.S. interests and delivers results for the American people. He served as deputy secretary of state for President Barack Obama from 2015 to 2017, and before that, as President Obama’s principal deputy national security advisor. In that role, Mr. Blinken chaired the interagency deputies committee, the main forum for hammering out the administration’s foreign policy.

During the first term of the Obama Administration, Mr. Blinken was national security advisor to then-Vice President Joe Biden. This was the continuation of a long professional relationship that stretched back to 2002, when Mr. Blinken began his six-year stint as Democratic staff director for the U.S. Senate Foreign Relations Committee. Then-Senator Biden was the chair of that committee from 2001 to 2003 and 2007 to 2009.

During the Clinton Administration, Mr. Blinken served as a member of the National Security Council staff, including two years as the senior director for European affairs, the president’s principal advisor on the countries of Europe, the European Union, and NATO. He also spent four years as President Clinton’s chief foreign policy speechwriter, and he led the NSC’s strategic planning team.

Mr. Blinken’s public service began at the State Department. From 1993 to 1994, he was a special assistant in what was then called the Bureau of European and Canadian Affairs. Now he is proud to lead the department where he got his start in government nearly 30 years ago.

Outside of government, Mr. Blinken has worked in the private sector, civil society, and journalism. He was a founder of WestExec Advisors, an international strategic consulting firm focused on geopolitics and national security. He was a senior fellow at the Center for Strategic and International Studies from 2001 and 2002. Before joining government, Mr. Blinken practiced law in New York and Paris. He was also a reporter for The New Republic magazine and is the author of Ally Versus Ally: America, Europe and the Siberian Pipeline Crisis (Praeger, 1987).

Mr. Blinken attended grade school and high school in Paris, where he received a French Baccalaureat degree with high honors. He is a graduate of Harvard College and Columbia Law School. He and his wife Evan Ryan have two children. 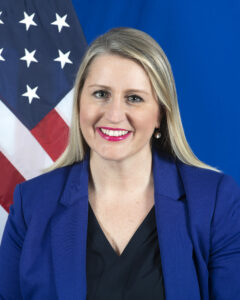 On April 4, 2022, Secretary of State Antony Blinken delegated the functions and authorities of the Under Secretary for Public Diplomacy and Public Affairs to Elizabeth M. Allen. She has served as the Assistant Secretary of Global Public Affairs since September 13, 2021.

With over 15 years of strategic communications and public affairs experience, Liz specializes in message strategy, project and crisis management, and leadership communications. She was previously a Partner at Finsbury Glover Hering (FGH), leading integrated communications campaigns and providing strategic counsel to a range of global philanthropic, corporate, non-profit and entertainment clients. In 2020, Liz served as Vice President Kamala Harris’s communications director on the Biden-Harris Presidential campaign.

During her White House tenure, Liz drove communications planning around the President’s priorities, domestic and foreign policies, and legislative and outreach strategy. She managed complex message events, groundbreaking interviews and documentaries, and press coverage for President Obama and Vice President Biden across the United States and in more than 30 foreign countries on five continents.

Liz’s former public service extends to the U.S. Department of State, where she served as Director of Public Affairs for Educational and Cultural Affairs, focusing on public diplomacy and the impact of people-to-people exchange programs and international education. She previously worked at the State Department on human trafficking and international women’s issues.