The Department of State’s Bureau of Economic and Business Affairs  will host a panel discussion on the P.O.W.E.R. Initiative and the ways in which the Department and EB partner with the private sector to implement the Biden-Harris Administration’s National Gender Strategy.
By alexandrels

Heather Joy Thompson, Esq., is a lawyer and an award-winning career diplomat at the United
States Department of State. She works in the Bureau of Economic and Business Affairs’s Public Diplomacy
division.  This summer she will lead the Public Affairs shop at the United States Mission to the African
Union in Addis Ababa.  She previously served as a representative to the United Nations (UN) General
Assembly. She was previously the Diplomat-in-Residence and a Senior Fellow at UCLA. She has served in
Washington, D.C., Mexico City, and Johannesburg.  While in living in Johannesburg, Heather Joy co-founded Abafazi Ambassadors, and leadership development program for students from The Oprah Winfrey Leadership Academy for Girls, in Henley-Upon-Klip, South Africa. Heather Joy started her career as a Peace Corps volunteer in Burkina Faso, West Africa. Her travels and studies have taken her to more than 40 countries in North America, Europe, Africa,
Asia, South America, Central America, and Australia.

Heather Joy grew up in Southfield, Michigan. She earned a Bachelor of Arts degree in Studio Art
from Spelman College and a Juris Doctor from Wayne State University Law School. As an undergraduate,
she studied Renaissance art and Italian language in Florence, Italy. As a law student, she studied
international trade and European Union law in Thessaloniki, Greece, and Passau, Germany. She is a
member in good standing of the Michigan Bar Association.
Prior to joining the State Department, Heather Joy was Sean “Diddy” Combs’ personal assistant
and went on to lead his “Vote or Die” voter education campaign. Heather Joy currently stars in a national
television advertisement campaign for ‘Dove Amplified Textures.’ She has appeared on the Oprah Winfrey
Show, Where Are They Now, and in the pages of the New York Times, Town & Country Magazine, Ebony, JET, and PEOPLE.com. 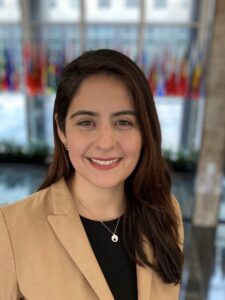 Dr. Beeta Ehdaie serves as Special Assistant to the Under Secretary for Economic Growth, Energy and the Environment and Senior Advisor on women’s economic issues to the Assistant Secretary of Economic and Business Affairs at the U.S. Department of State. She led in the conception and now the development of the Economic Bureau’s “Providing Opportunities for Women’s Economic Rise” (POWER) initiative. She also advises on U.S. policy and programs aimed at fostering women’s economic participation in the global economy, supporting entrepreneurship, digital and financial inclusion, multilateral development finance policies on environmental and social safeguards and sustainable economic growth. In her role as Special Assistant to the Under Secretary, Dr. Ehdaie works on foreign policy matters pertaining to global health and climate, which entails organizing and shaping the Department’s engagement on economic response to climate change and the global pandemics, including inclusive and equitable infrastructure. Women’s economic empowerment is a critical component to economic development and response to the global pandemic and climate change. In this vein, Dr. Ehdaie supports U.S. policy implementation aimed at fostering gender equality, women’s economic empowerment and equitable response to economic recovery and development.

Prior to joining the Department of State, Dr. Ehdaie completed her Postdoctoral Fellowship at the Johns Hopkins Bloomberg School of Public Health where she served as clinical lead for the Performance Monitoring and Accountability Project (PMA2020). Dr. Ehdaie’s technical background has been interdisciplinary at its core, and having enabled her to work with a variety of stakeholders, scientists to policymakers, to drive and apply innovative research and methodologies to address global health challenges and support inclusive public health policies and programs. Women’s economic advancement has been at the heart of Dr. Ehdaie’s international development experience having worked in South Africa and Uganda to transfer technologies from the lab to the field to empower local women entrepreneurs. Dr. Ehdaie is also co-founder and former Chief Technology Officer of Silivhere Technologies, Inc., a start-up company that develops water treatment technologies for low-income communities.

Dr. Ehdaie’s experience and innovative skills as a social entrepreneur were instrumental to her appointment as a Science Policy Fellow for the American Association for the Advancement of Sciences and recipient of the Franklin Award in the Bureau of Economics and Business Affairs. Dr. Ehdaie is a graduate and Rodman Scholar of the University of Virginia, where she obtained her Bachelors, Masters in Biomedical Engineering, and Ph.D. in Civil and Environmental Engineering, and was recipient of the NIH Infectious Diseases and Biodefense Training Fellowship, through the University of Virginia (UVA), School of Medicine, Division of Infectious Diseases and International Health. 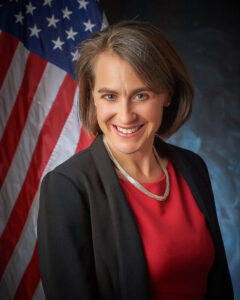 Lisa Miller took up her position as Economic Inclusion and Outreach team lead in the Office of Commercial and Business Affairs (EB/CBA) in September 2020.  In this capacity she leads CBA’s efforts to ensure that economic growth more effectively translates into economic opportunities for all, including women, minorities, small businesses, entrepreneurs, and other historically under-served populations.  She also leads the Department’s implementation of the Championing American Business Diplomacy Abroad (CABDA) Act and efforts to ensure the office is adequately staffed to meet CABDA’s new mandates.  Prior to joining CBA, Ms. Miller served as the Economic Counselor at the U.S. Embassy in Tegucigalpa where she led a team focused on supporting Honduran efforts to build broad-based economic prosperity and encourage institutional reforms while promoting U.S. economic interests.  Her other domestic assignments include leading strategic planning for the Office of the Under Secretary for Public Affairs, public outreach for the Office for Weapons Removal and Abatement, Desk Officer for Serbia and Montenegro and Bulgaria, and a stint as the Department of State’s liaison to the Centers for Disease Control in Atlanta, Georgia.  Other overseas assignments include London, Milan and Jerusalem.  Before joining the Department of State, Ms. Miller participated in a number of community public health projects in Mexico and Ecuador.  Originally from San Francisco, California, she is a graduate of the University of California Berkeley. She is joined in Washington by her husband and their three children.

Noelle Spring is a Foreign Affairs Officer with the U.S. Department of State, currently serving in the Economic and Business Affairs Bureau’s Office of Development Finance, where she works on development finance for the Africa region and women’s economic empowerment.  She joined the State Department as a Presidential Management Fellow in 2017, and spent her first three years as a PEPFAR Program Manager in the Office of the Global AIDS Coordinator, where she managed PEPFAR programs in Cote d’Ivoire, Haiti, and the Dominican Republic. Prior to joining the State Department, she worked as a consultant at the World Bank Group and also as a research analyst for the Results for Development Institute. She holds a M.S. in Foreign Service from Georgetown University, and a B.A. in International Relations from Stanford University.

Close Tabs
Close out of the windows you’re not using.

Clear your Cache
Go to your History and Clear Browsing Data.

Restart your Computer
Close out and restart.