Large asteroid impacts are capable of global devastation. They have occurred before on Earth – notably ending the age of dinosaurs – and will occur again unless we prevent them. The scale and potential consequences of a large asteroid impact has generated significant attention among scientists, policymakers, and capturing the attention of citizens everywhere through media and entertainment.

Planetary Defense is relevant to all nations and has led to considerable international cooperation and partnerships to manage the risk of asteroid impacts. In this program, we will highlight several of these efforts, including the joint NASA and Italian Space Agency’s DART and LICIACube missions.

Join us on Tuesday, June 28th to learn more about the strategy and methods behind international cooperation on planetary defense. Our expert panelists are at the forefront of scientific, technological, and diplomatic efforts to ensure the global community is informed and prepared for the risks of asteroid impacts. Viewers will be able to post comments and questions live to our speakers during the one hour program.

Have advance comments or questions? Post them in the chat space below and we’ll respond. For more information, reach out to Loren Hurst at hurstlw@fan.gov. 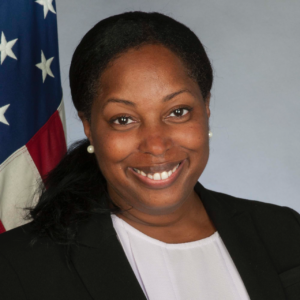 Jennifer “J.R.” Littlejohn is the Principal Deputy Assistant Secretary in the Bureau of Oceans and International Environmental and Scientific Affairs. She is a career member of the Senior Foreign Service, most recently serving as the Deputy Director of the Secretary of State’s Policy Planning Staff. Prior to that, she was the Deputy Chief of Mission at the U.S. Embassy in Skopje, North Macedonia. In Washington, Ms. Littlejohn has served as the Director for Central and Northern European Affairs on the National Security Council staff at the White House; Director for Policy Planning and Public Diplomacy in the Bureau of Democracy, Human Rights and Labor; Senior Advisor on the Secretary of State’s Executive Staff; and Special Assistant to the Under Secretary of State for Political Affairs. Overseas, she has served as the Deputy Chief of Mission at the U.S. Embassy in Dili, Timor-Leste and the Executive Secretary at the U.S. Embassy in Kabul, Afghanistan, in addition to assignments in Brazil, Thailand, and Germany. Ms. Littlejohn earned a Master of Science in National Resource Strategy from the National Defense University; a Master of International Affairs from Columbia University; and a Bachelor of Arts in Political Science from Morgan State University. She has studied German, Macedonian, Portuguese, and Thai, and is the recipient of several State Department Superior Honor Awards. Prior to joining the Foreign Service, she was a Robert Bosch Foundation Fellow in Berlin, Germany. 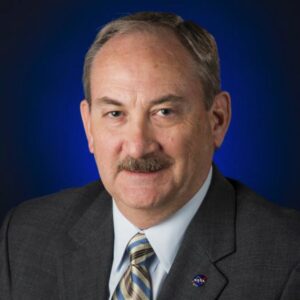 Lindley Johnson is assigned to NASA Headquarters Science Mission Directorate, Planetary Science Division, as the NASA Planetary Defense Officer and Lead Program Executive for the Planetary Defense Coordination Office, tasked with warning and response to any potential impact of Earth by an asteroid or comet. Prior to NASA he served 23 years in the Air Force, achieving the rank of lieutenant colonel and numerous military honors and decorations. After joining NASA in 2003, he became the Program Executive for NASA’s Deep Impact mission to comet Tempel 1, launched in January 2005 to explore the composition and structure of comets. NASA’s Near-Earth Object Observations program has discovered over 26,000 near-Earth asteroids and comets since Lindley became its manager, about 92% of the total known. He led the establishment of the Planetary Defense Coordination Office at NASA in January 2016 and received the NASA Exceptional Achievement Medal for his work. Asteroid 5905 (1989 CJ1) is named “Johnson” to recognize Lindley’s efforts in detecting Near Earth Objects. 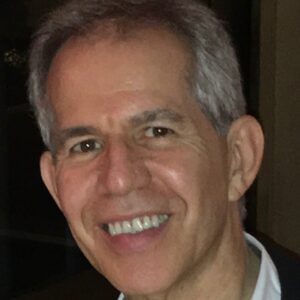 Humberto Campins is Pegasus Professor of Physics and Astronomy and head of the Planetary Science group at the University of Central Florida in Orlando. He studies asteroids, comets and other solar system bodies. He was a 2021-2022 Jefferson Science Fellow at the US State Department’s Bureau of Educational and Cultural Affairs.  He is a member of NASA’s OSIRIS-REx asteroid sample return mission, arriving back on Earth in 2023. He also works on European Space Agency projects, including the Gaia mission. He directed NASA’s Florida Space Grant Consortium for 3 years. In 2010 he discovered water ice and organic molecules on asteroid 24 Themis, adding weight to the idea that some of Earth’s water came from asteroids. He has earned multiple awards, including a Fulbright Senior Research Award in 2008 to work in Spain, and in 2010 a Don Quijote Award for professional of the year in Orlando. Asteroid “3327 Campins” was named after him by the International Astronomical Union. 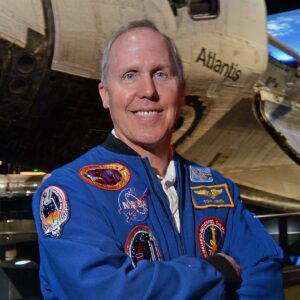 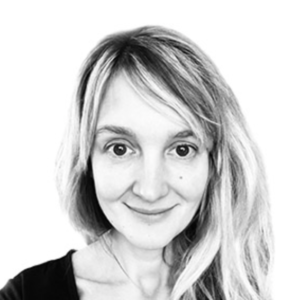 Elena Adams is the mission systems engineer on NASA’s Double Asteroid Redirection Test (DART) mission at the Johns Hopkins Applied Physics Laboratory (APL) in Laurel, Maryland. Prior to joining APL in 2008, she was a planetary scientist, working on NASA missions to Jupiter and Saturn. Since pivoting to her role as a systems engineer, she has worked on NASA and ESA missions to Mars, Earth’s Van Allen Belts, Europa, and the Sun, as well as studies for NASA’s Planetary Defense Coordination Office and the National Oceanic and Atmospheric Administration. She won multiple NASA grants for developing technology for future space exploration, including a hopping lander to explore asteroids and a sampling system for collecting water from Enceladus, a moon of Saturn. She received a B.S. in applied mathematics from the University of Virginia; an M.S. and Ph.D. in atmospheric, oceanic and space sciences, and an M.E. in space systems from the University of Michigan.

Ettore Perozzi is a senior scientist with a long-standing experience in celestial mechanics, dynamics of the solar system, mission analysis, education and public outreach. He has worked in research institutions, space agencies, in the aerospace industry and he is presently at ASI – the Italian Space Agency. Involved in the early developments of the European Space Situational Awareness (SSA) programmes, he has played a leading role in the establishment of the ESA NEO Coordination Centre at ESRIN. Asteroid n. 10027 is named after him. 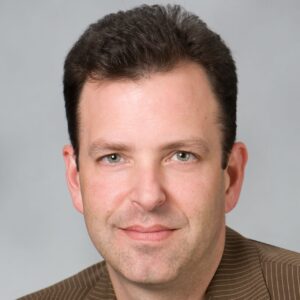 Loren Hurst is a strategic communications professional with over 25 years experience in public diplomacy, government relations, and digital communications. He specializes in the strategic use of virtual technologies to engage stakeholders, research target audiences, and build reputation management solutions. Currently, he builds interactive virtual program strategies in the U.S. State Department’s Bureau of Global Public Affairs where he specializes in science affairs, economics, and climate change outreach. Mr. Hurst holds degrees from the Catholic University in Leuven, Belgium, and California State University, Fullerton. 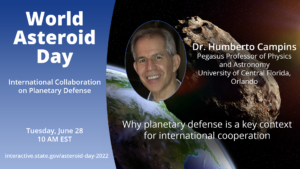 Why planetary defense is a key context for international cooperation. 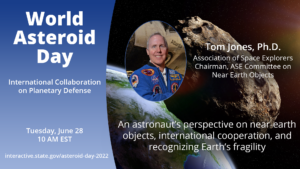 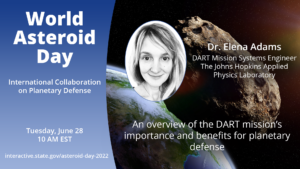 An overview of the DART mission’s importance and benefits for planetary defense. 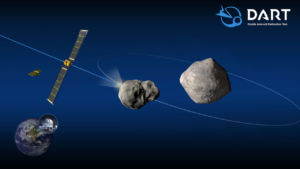 NASA’s first flight mission for planetary defense, the Double Asteroid Redirection Test (DART) seeks to test and validate a method to protect Earth in case of an asteroid impact threat. The DART mission aims to shift an asteroid’s orbit through kinetic impact – specifically, by smashing a spacecraft into the smaller member of the binary asteroid system Didymos. 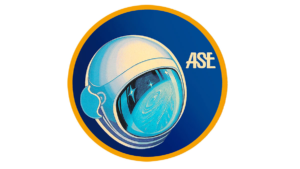 Founded in 1985 by a small group of US, Russian and international fliers, the Association of Space Explorers (ASE) applies the unique perspective of our astronaut / cosmonaut members to promote the global benefits of space science, exploration and international cooperation; to educate and inspire future generations; and to foster better stewardship of our home planet. ASE is an international nonprofit professional and educational organization of over 400 flown astronauts and cosmonauts from 38 nations. 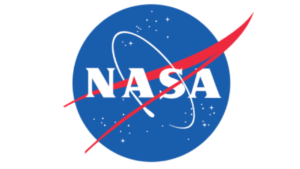 NASA’s planetary science program is engaged in one of the oldest scientific pursuits: the observation and discovery of our solar system’s planetary objects. We undertake this enterprise in order to better understand the history of our solar system and the distribution of life within it. For decades, NASA’s planetary science program has advanced the scientific understanding of the solar system in extraordinary ways, while pushing the limits of spacecraft and robotic engineering design and operations. Learn more about Planetary Defense at NASA.

The UCF Planetary Sciences Group uses spacecraft data, images from the world’s largest telescopes, meteorites and moon rocks, experimental techniques, and supercomputers to investigate our own Solar System as well as others around the Galaxy.