Celebrating the Contributions of Southeast Asian Americans to the United States

As the United States marks Asian American, Native Hawaiian, and Pacific Islander Heritage Month in May 2022, we pay tribute to the generations of Asian Americans, Native Hawaiians, and Pacific Islanders who paved the way for greater opportunity and celebrate our communities’ journey of resilience. We also recommit ourselves to confronting discrimination and hate in all their forms – so that together, we can create an America that is truly equitable and inclusive. The United States is home to over 7 million Americans with ties of family and heritage to the countries of Southeast Asia. With President Biden’s Special Summit with the leaders of the Association of Southeast Asian Nations (ASEAN) taking place on May 12-13, this event will highlight the impressive role Americans with ties to Southeast Asia and the ASEAN member states have played in America’s history and our modern society.

On Monday, May 9th at 1:30 PM EDT, in this 90-minute virtual program hosted by the White House Initiative on Asian Americans, Native Hawaiians, and Pacific Islanders (WHIAANPI) and the Department of State, we will have a conversation with a number of extraordinary individuals who have made significant contributions to the United States, in the sciences, arts, business, politics, and more. Senior officials from the White House and State Department will emphasize our whole-of-government commitment to diversity, equity, inclusion and accessibility, and to deepening people-to-people ties both at home and abroad. 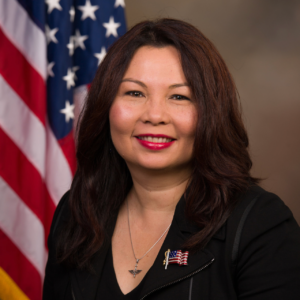 U.S. Senator Tammy Duckworth is an Iraq War Veteran, Purple Heart recipient and former Assistant Secretary of the U.S. Department of Veterans Affairs who was among the first handful of Army women to fly combat missions during Operation Iraqi Freedom.  Duckworth served in the Reserve Forces for 23 years before retiring at the rank of Lieutenant Colonel in 2014.  She was elected to the U.S. Senate in 2016 after representing Illinois’s Eighth Congressional District in the U.S. House of Representatives for two terms. Senator Duckworth serves on the Armed Services Committee; the Environment & Public Works Committee; the Commerce, Science, & Transportation Committee; and the Small Business & Entrepreneurship Committee. Duckworth is fluent in Thai and Indonesian.  She attended college at the University of Hawaii and earned a Master of Arts in International Affairs from the George Washington University.  Senator Duckworth and her husband Bryan are the proud parents of two daughters, Abigail and Maile. 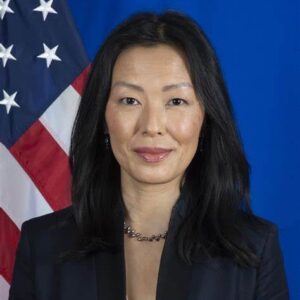 Dr. Jung H. Pak is a Deputy Assistant Secretary for Multilateral Affairs and for Global China issues. She also serves as Deputy Special Representative for the Democratic People’s Republic of Korea (DPRK). Prior to arriving at State, she was a senior fellow at the Brookings Institution, where she focused on Korean Peninsula issues, East Asia regional dynamics, and transnational threats. While at Brookings, she authored Becoming Kim Jong Un, which draws from her deep knowledge and experience as an intelligence officer. Pak has held senior positions at the Central Intelligence Agency and served as the Deputy National Intelligence Officer for Korea at the National Intelligence Council. Before her career in national security, Dr. Pak taught U.S. history at Hunter College in New York City. She received her PhD from Columbia University and studied in South Korea as a Fulbright Scholar. Pak is a graduate of Colgate University, where she is Trustee Emerita and recipient of an honorary doctorate. 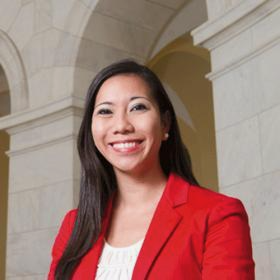 Krystal Ka‘ai is the Executive Director of the White House Initiative on Asian Americans, Native Hawaiians, and Pacific Islanders (WHIAANHPI) and the President’s Advisory Commission on Asian Americans, Native Hawaiians, and Pacific Islanders. In this role, she is responsible for advising the Biden administration on the coordination and implementation of federal programs and initiatives to advance equity, justice, and opportunity for Asian American, Native Hawaiian, and Pacific Islander (AA and NHPI) communities. Prior to joining WHIAANHPI, Krystal worked on Capitol Hill for over a decade, including serving as the Executive Director of the Congressional Asian Pacific American Caucus (CAPAC) for eight years. She previously held positions with the U.S. Senate Committee on Indian Affairs, the State of Hawai‘i, Office of Hawaiian Affairs, and the National Japanese American Memorial Foundation. Krystal was born and raised in Hawai‘i and is the first Native Hawaiian to ever lead WHIAANHPI. 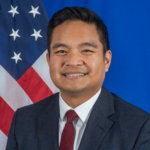 Richard Buangan is a public diplomacy-coned career member of the Senior Foreign Service, Class of Minister Counselor, who joined the Department of State in 1999. His overseas assignments have included Jerusalem, Beijing, Paris, and Abidjan. Richard was most recently a Deputy Assistant Secretary in the Bureau
of East Asia and Pacific Affairs and served as an Executive Assistant to Secretary of State Michael R. Pompeo. He has also served several assignments in the Bureau of Public Affairs, including Managing Director for International Media and Director of the Office of Digital Engagement, and has worked on the Secretariat Staff. Born and raised in San Diego, California, Richard holds a Bachelor of Arts in Political Science and Economics from St. Edward’s University in Austin, Texas, and speaks French, Spanish, and Mandarin Chinese. On April 15, 2022, the White House announced President Biden’s intent to nominated Richard as U.S. Ambassador Extraordinary and Plenipotentiary to Mongolia. 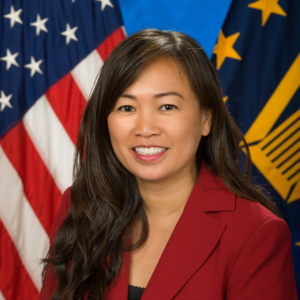 Dr. SreyRam Kuy is a practicing general surgeon caring for veterans at the DeBakey Veterans Affairs Medical Center and as Deputy Chief Medical Officer, VISN 16 at the US Department of Veterans Affairs where she leads efforts to improve healthcare quality, patient safety and value-based care for our nation’s heroes. Dr. Kuy previously served as Deputy Under Secretary for Health for Community Care at the US Department of Veterans Affairs and served as Chief Medical Officer for Medicaid in the Louisiana Department of Health. Born in Cambodia during the Killing Fields period, SreyRam and her family escaped to a border refugee camp but were severely injured by errant explosives. A volunteer Red Cross surgeon saved her life and inspired SreyRam to become a surgeon herself. Christian missionaries helped the family come to America, where she grew up in Oregon, was Valedictorian of her high school, and attended Oregon State University earning dual degrees in Philosophy and Microbiology. She attended medical school at Oregon Health & Sciences University and completed her master’s degree in healthcare policy at the Yale University School of Medicine. 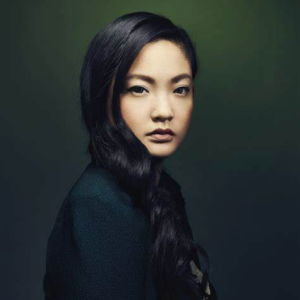 Amanda Nguyen is a social entrepreneur. Her 2021 viral video ignited worldwide coverage on anti-asian hate crimes and is credited as a pivotal moment for the Stop Asian Hate movement. She was nominated for a Nobel Peace Prize in 2019 for penning her own civil rights into existence by unanimously passing the Sexual Assault Survivors’ Bill of Rights. As the CEO of Rise, a social movement accelerator, she teaches grassroots organizing. She is also an expert advisor on the Chloé Sustainability Board. In recognition of her work, Amanda is a 2022 TIME Magazine Woman of the Year, Heinz Laureate, Nelson Mandela Changemaker, Forbes 30 Under 30, Foreign Policy 100, TIME 100 Next, Frederick Douglass 100, and Marie Claire Young Woman of the Year. Previously, Amanda served at NASA and the State Department under the Obama Administration. Amanda graduated from Harvard University. 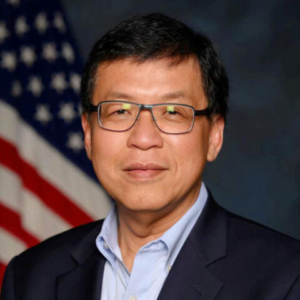 Emigrating from Singapore in late 1989, Simon Pang has been in the banking industry since 1981. Simon is currently an Executive Vice President and Co-Founder of Royal Business Bank. He is active in community service and has been appointed to positions in statewide and nonprofit organizations, including as a California Commission on Asian and Pacific Islander American Affairs member, California Highway Patrol Citizens Advisory board member, Los Angeles County Sheriff Youth Foundation board member, US-Sino Friendship Association President, and US-Sino Aviation Heritage Foundation Honorable Chairman. He has also served as a National Governing Board Member and National Diversity Coalition Advisor with the national nonprofit Asian Pacific Islander American Affairs. 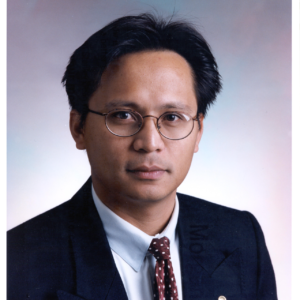 Dr. Moe Z. Win is a professor of Aeronautics and Astronautics at the Massachusetts Institute of Technology (MIT), and the founder of MIT’s Wireless Information and Network Sciences Laboratory (WINSLab). Prior to joining MIT, he spent 5 years at AT&T Research Laboratories and 7 years at the NASA Jet Propulsion Laboratory. He received the BS degree (magna cum laude) from Texas A&M University in 1987 and the MS degree from the University of Southern California (USC) in 1989, both in electrical engineering. As a presidential fellow at USC, he received both an MS degree in applied mathematics and the PhD degree in electrical engineering in 1998. He is a widely-cited researcher internationally known for his work in wireless communications and ultra-wideband localization, and his current research also focuses on quantum information science. He has served on the Society for Industrial and Applied Mathematics Diversity Advisory Committee, promoting diversity in STEM fields.